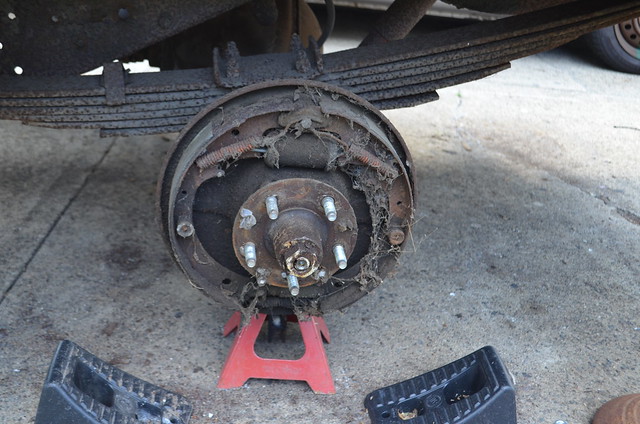 For those interested in the ongoing saga, it is still ongoing, but massive progress was made. I pulled the wheels off the trailer. The driver’s side(above) had no brake drum, but did have recent lug studs & nuts, so that was a pleasant find. 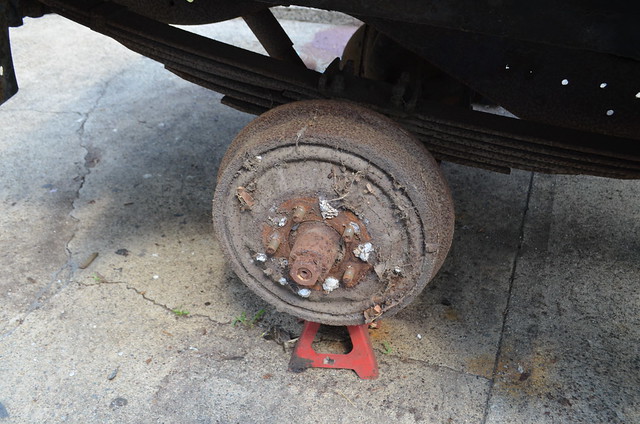 The passenger side required a 2 foot breaker bar with a 3 foot cheater bar. However I didn’t snap any lugs, so it went easily all things considered. 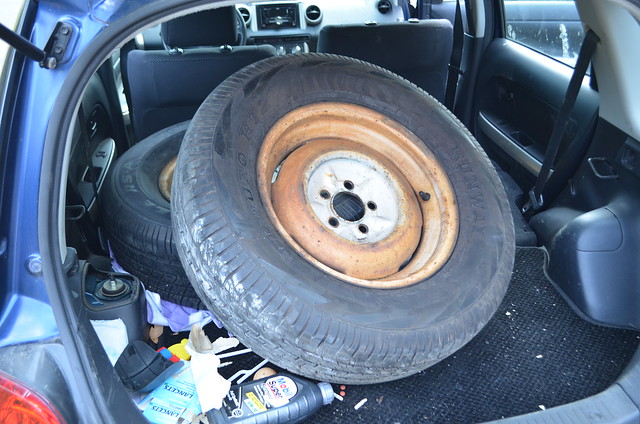 A couple of hours hunting junkyards and used tire shops netted me two mismatched but similar 235/70R16 passenger tires. They should be fine as I’m not planning to do any heavy hauling with the trailer. If I start using it for heavier loads I’ll upgrade to proper heavy duty trailer tires. 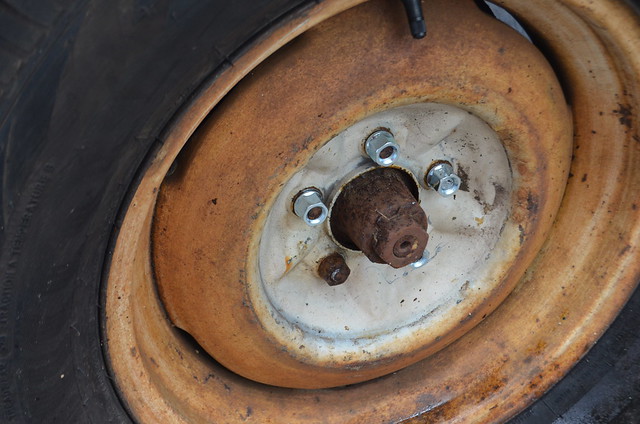 Replaced 4 of the rusted lug nuts as autozone(the only place open at 5pm on Sunday) only had 4 so I need to find another. Or find 5 that are the same style as the far side(these take a different socket size). 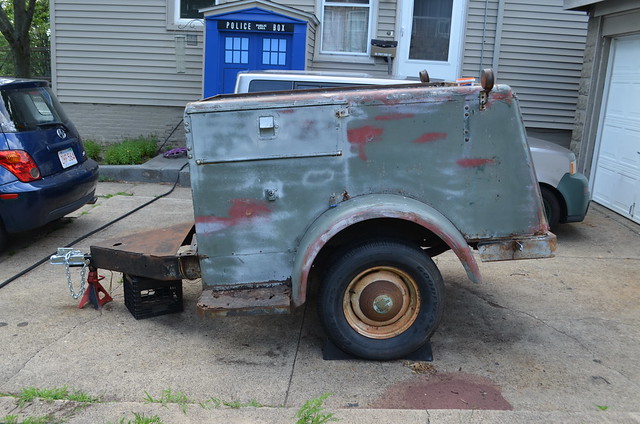 I also installed a Harbor Freight trailer jack. I had to drill one new hole to match the pattern on the new jack. I would have preferred to mount it from underneath so it would be lower(it is at its maximum when the trailer is level, but this was the only way it would both fit and be able to be bolted in place. 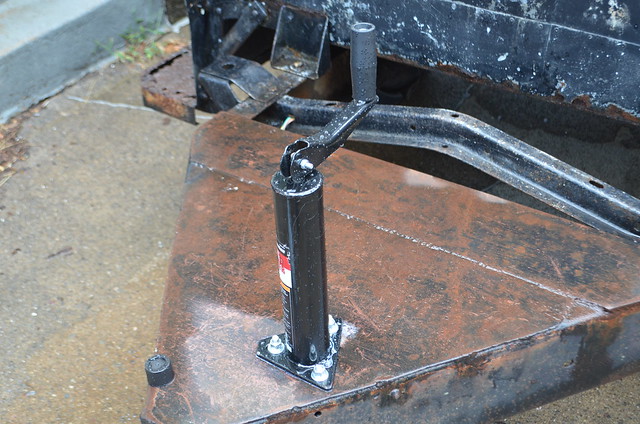 So the trailer is now level front to back & side to side, and able to be moved for the first time since it arrived. I will need to add some sort of fold/crank down support at the back as it likes to tip back if you put weight on the bumper. 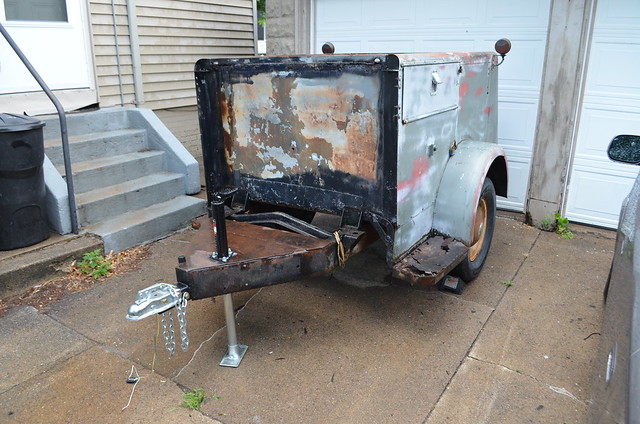 But for now it is installed & wired lights away from it being legal and safe to tow. 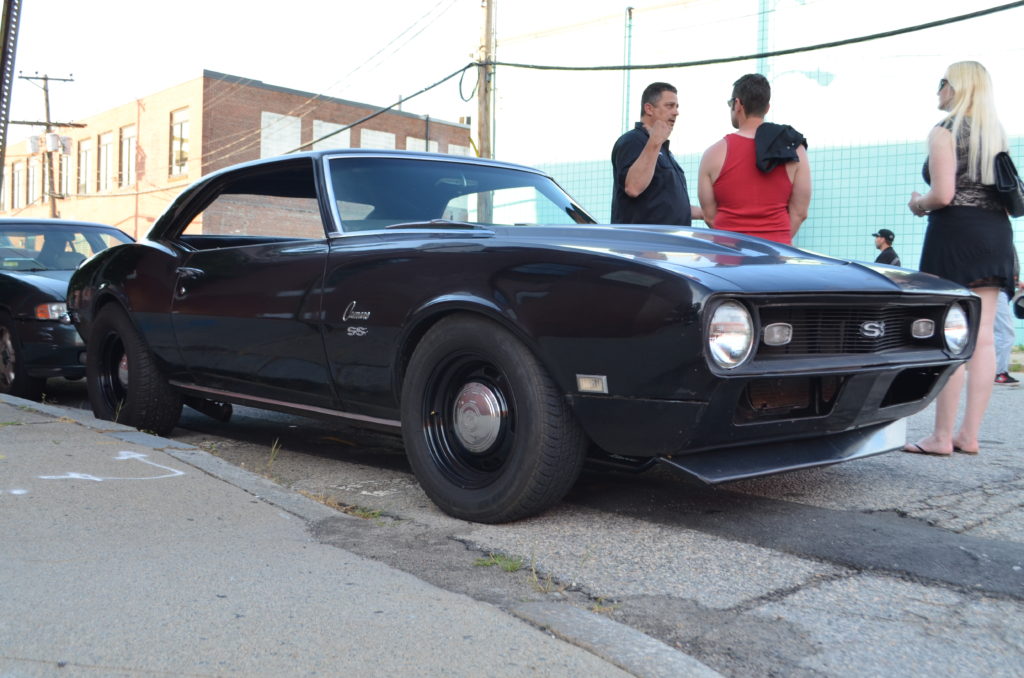 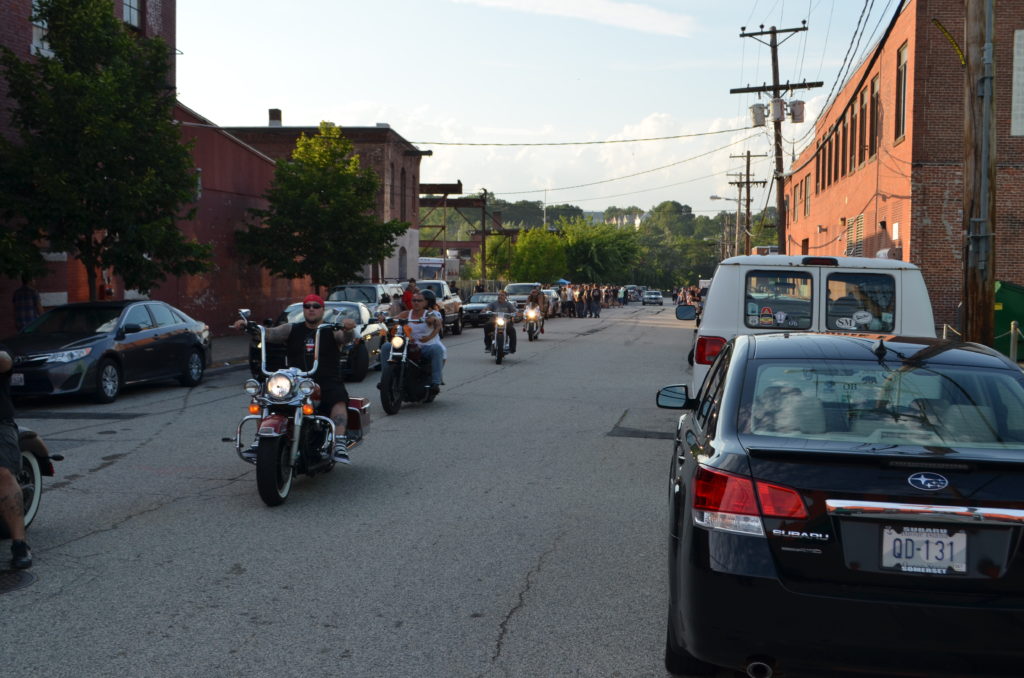 One way to make yourself a classic convertible is to cut out the middle of a Chevy Lumina and graft in the body of a 1939 Mercury Convertible. Then paint it purple and add lots of 80s Mercury badging.

Not a good way, mind you. More of an”Eye-Searing Horror That Causes Involuntary Rectal Bleeding” sort of way.

Every angle of this thing is horrible. There’s isn’t a part that doesn’t look like a crime against basic automotive design.

But at least you’ll have the very best of 1990s front wheel drive GM technology to power you along.

So, if after looking at the photo below of a stock ‘39 Mercury convertible you decide you’d rather have this rolling horrorshow, you can buy it for only $47,999.00.

What you are looking at here is a 1958 Cadillac Eldorado body sitting on a stretched 1972 FWD Eldorado chassis, complete with 500 cubic inches of torque-monster V8 under the flip-front hood.

My favorite part was the owner/builder’s off-hand comment that he built it with “stuff I had lying around”. I envy anyone who has this much Cadillac goodness just lying around.

On Saturday(while I was a state away buying my new bike), a good friend pulled out in front of a car that was going much faster than she thought, and they hit her in the driver’s wheel, spinning her car and totaling it.

She got away with a few nasty bruises, and her toddler in the back seat was completely unharmed, despite her car seat being twisted 90deg on its base by the impact. Her car however is a writeoff, and with liability only she’s unlikely to see much, if any, payout from the accident.

I loaned her Box, and drove the ‘64 pickup to work. She needed safe cheap wheels fast, so off to Craigslist I went. Her only requirements were FWD or AWD & new enough to have the LATCH car seat system.

I got lucky on my first search and found this 2002 Chevy Prizm. With an auto trans and grey on grey color scheme, it is pretty damn boring. But it has only 162K, everything works including the a/c, there is little rust, and I got it for all of $1100.

Both she and I would have loved to get her something more interesting, but sometimes life doesn’t give you much choice in the matter. At least it is better(and newer) than the turd of a Focus she got from her ex-husband, and should be reliable enough to let her save some money for something nicer down the line. 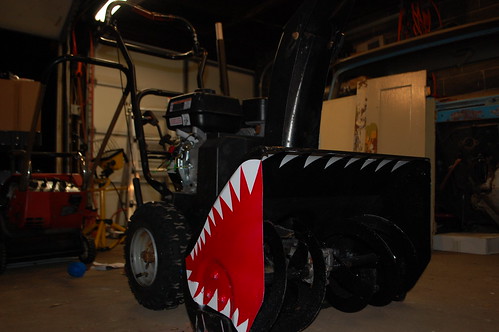 That was a good use of the evening 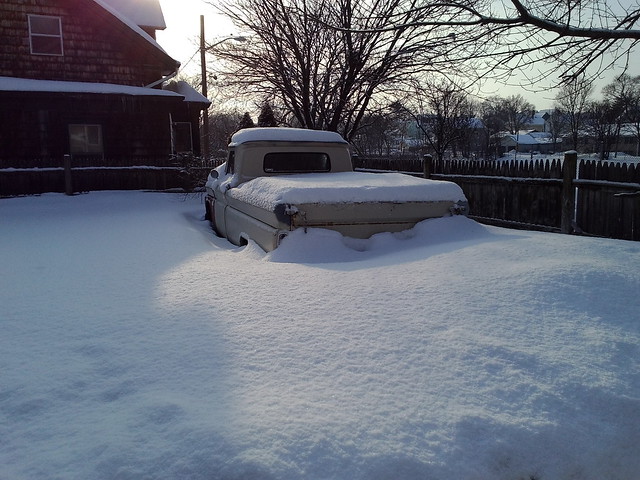 Things are a bit frozen over here at the garage of improbability. Work on outside projects has stopped dead, and inside projects are moving at a crawl at best. 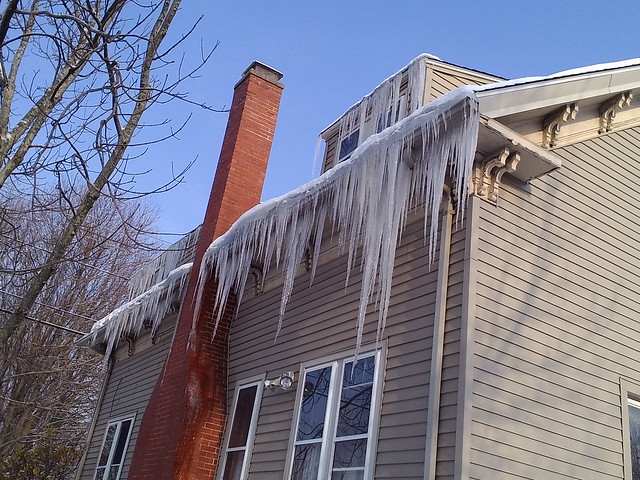 With luck it will start to warm up in the next few weeks and things can get moving again. Until then I’ll just hope I don’t need to get anything out of the shed. 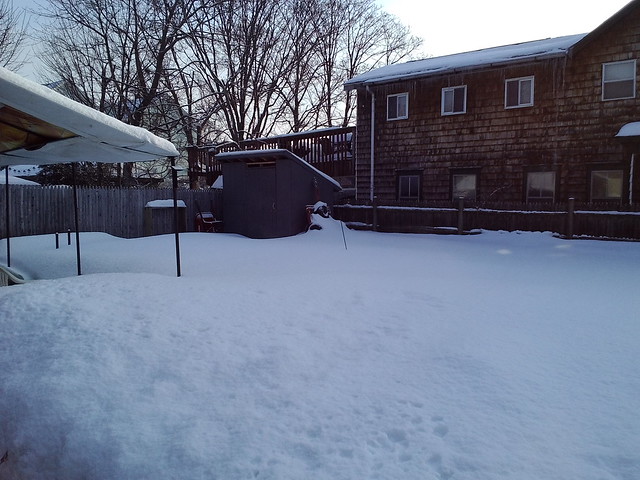 Despite never having drunk alcohol and having no interest in doing so, I am fascinated with barware. I love all the odd glasses, mixers, stirrers, bar decorations, and other “stuff” that is associated with alcohol(and especially mixed drinks). The stuff from the 50s/60s are my favorites. And of all that I have seen, this set is my absolute number one barware lust object.

They are absolutely the coolest set of glasses(there is supposed to be one more, but the set pictured is missing it). Sadly, in the rare case they pop up on ebay they tend to go for $200+. So it may be a long time before I can get some.

But when I do they will have a place of honor in the rumpus room that will one day be built in the basement.