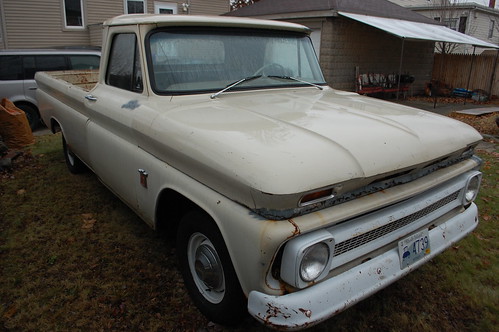 My plan now that the weather is warmed up is to start in on the rust repair on the truck. My hope is to get the bodywork done so I can get paint on it before the end of the season. At a minimum though I want to get the cab & inner structure repaired so even if I don’t finish all the bodywork this season, I’ll know the underlying structure is solid. 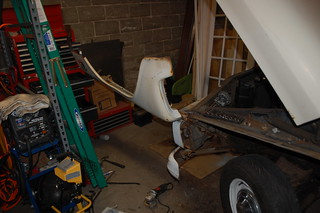 Step one was the pull the front end apart. That turned out to be easier said than done, everything is so rusty nearly every bolt was a challenge. I averaged 1 snapped bolt for every 3-4 that came out normally. The front-most fender bolt was particularly difficult as you can see. 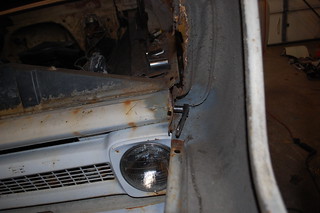 In addition to looking ridiculous, this actually was really helpful. I could see what I was doing, and therefore could figure out what tools would fit and let me get the bolt off.

Once the fenders & grille were off and the front grille panel was loosened(it won’t come off completely until the front bumper or radiator support come off), I could see the degree of the problem. 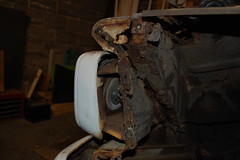 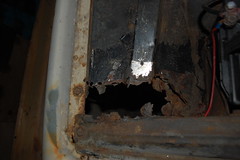 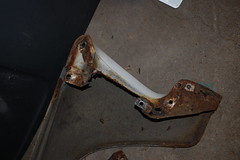 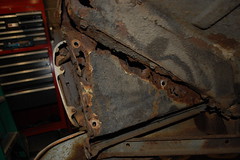 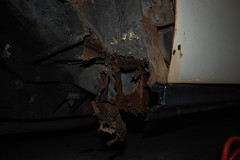 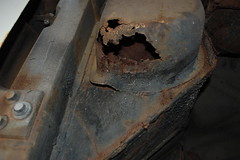 AS you can see there is a lot of work here. However since one of the reasons I bought this truck was to practice welding and fabrication, this is not as terrible as it might be to someone else. My plan is to see how much I can fix/fabricate myself before buying any more parts. Pulling the wheels off, I started getting a more detailed look at the condition of the beater box. There was a lot of dirt & sand all over the undercarriage, when I pulled the fender liners, I found a large supply of compost stuck in the fender wells. Fortunately some quality time with the pressure washer returned the driver’s side to factory condition. I wasn’t so lucky on the passenger side, there was a lot more dirt & mud on this side, and is was wet, which is a bad sign. The bottom corner of the fender was also bashed pretty good, exposing the metal, which had rusted. The pressure washer didn’t help, exposing surface rust on the inside panel. The rocker in this area  on the passenger side was similarly sketchy, with a lot of rust under the paint. At this point I started getting really nervous, as the car had been free of rust except for some surface rust prior to finding this. So I broken out the angle grinder and got started stripping the paint. What I found wasn’t good at all. The rocker was barely there, with a big chunk being nothing but lacy rust. The fender bottom was also rotted out. The fender is a lot cause, given the other dents all over it, so I sealed the rust and will be looking for a good replacement fender. The rocker however would need significant rust repair. So the beater box was moved into the garage and propped up so I could get at the rocker. About this time the temperature plummeted, so the work ended up being stretched out over the next month a few hours at time on evenings when it was warm enough that by heater could keep up and the garage could get up into the 30s or 40s. I was lucky in that the rust wasn’t in the torque boxes, so I started cutting out the rotted sections in preparation for welding in patches. I welded in a patch, only to have the edges blow out because the surrounding metal was thin & rusted. I kept cutting out more sections and welding in more patches and every time the edge would blow out again. I finally gave up and cut the entire next section out of the rocker so I new I was back to good metal. This turned out to to be a very good idea, as the metal that looked solid was actually pretty perforated. I then welded up the new hole, which went far better with good metal to weld to. The patches went in ok, though they are a bit ugly due to my hap-hazard repairs. Fortunately they will be hidden once the rocker molding is back on. Since there is a bit more money in the truck fund, I’ve started acquiring the bits to do the rust repair the longbed needs. To that end I found someone on Craigslist selling a lot of ’66 Chevy truck parts left over from a project he got rid of. I was able to pick up every bit I need to fix the rockers on both sides, including some I probably won’t need. It was about $400 of metal for $200. This includes inner & outer rockers, front floors, floor braces, cab corners & front footwells. I was also able to get a less rusty hood, and a complete(if somewhat rusty) roof section to fix the dents & damaged roof drip rails. It looks like the sections I most need are in good shape. I was also able to get a set of good sunvisors to replace the one destroyed one in the truck, a spare set of wheel cylinders, and a free 1966 shop manual supplement(wrong year, but close enough to be useful).

Box hauled it all home easily, with the new metal pieces inside & the hood & roof sections strapped onto Box’s roof.

Now I just need the weather to warm up, and I’ll be able to start working on the truck again.