It has been embarrassingly long since the last update, given I’m reporting stuff that actually happened before that update. I blame the mother of all sinus infections, which knocked me on my ass for a month and is still sapping my energy. 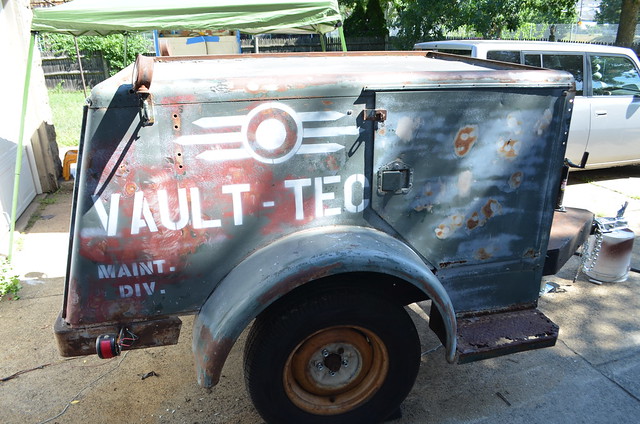 Once I got the trailer safe to tow, it was time to make it look right. I was in charge of props for Templecon, and our theme was post-apocalypse. So in addition to the Nuka-Cola machine, and the vault-door stage backdrop, I decided to letter the trailer up as belonging to Vault-Tec. 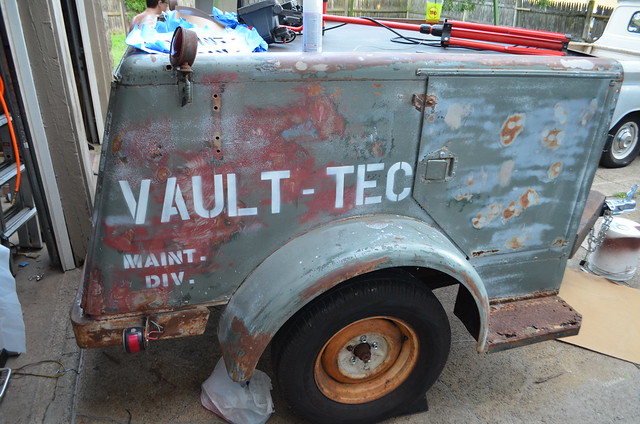 The lettering was simple hardware store stencils. At this point I wasn’t really happy with it and was afraid it was going to look half-assed. 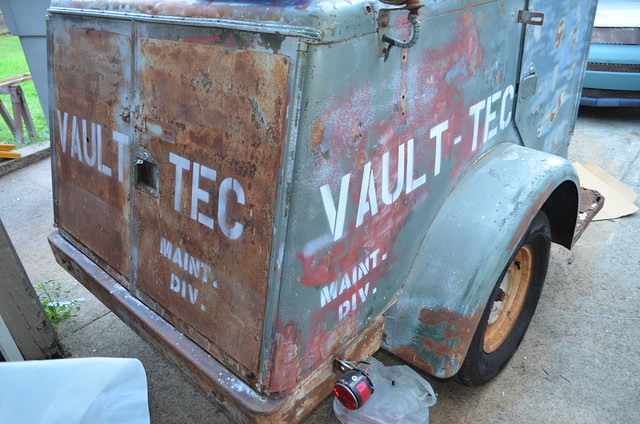 That all changed when I made and applied the stencil for the Vault-Tec logo. that changed the look so much I was downright giddy. 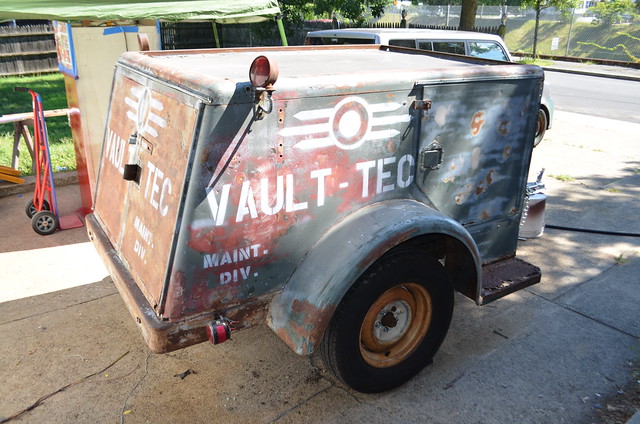 I also quickly tack-welded the ends of the steps to the fenders to keep them from flapping around, and made a loop for the rear lock hasp as the original was cut off. Then it was time to load everything up and head for the convention. 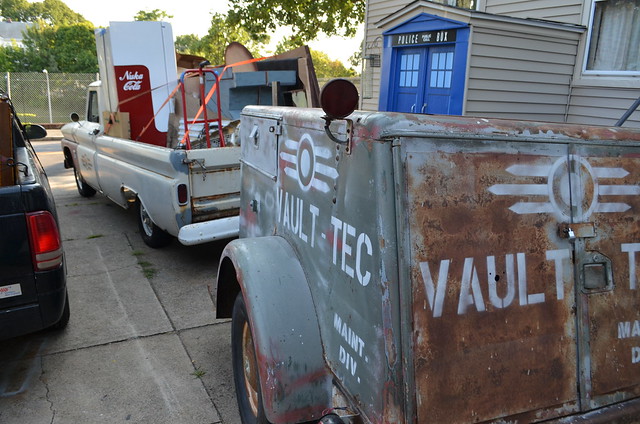 During the convention the trailer was on display as seen in the first pic. In addition to looking cool I used it to store my tools/duct tape/zipties/etc. which came in handy for inevitable disasters on stage and around the con. 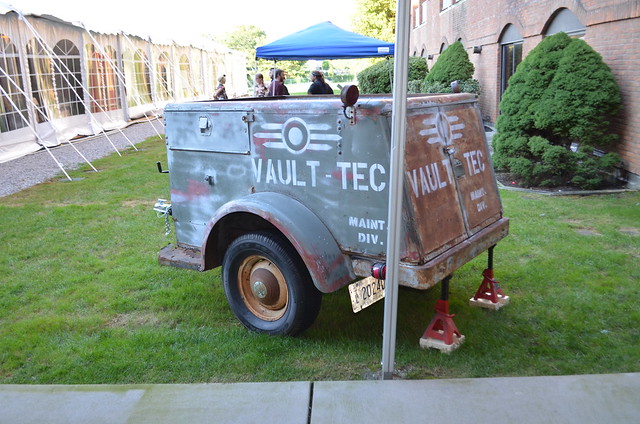 Saturday I found a small puddle of water on my bathroom floor where there shouldn’t have been any. Chasing the moisture turned into this: 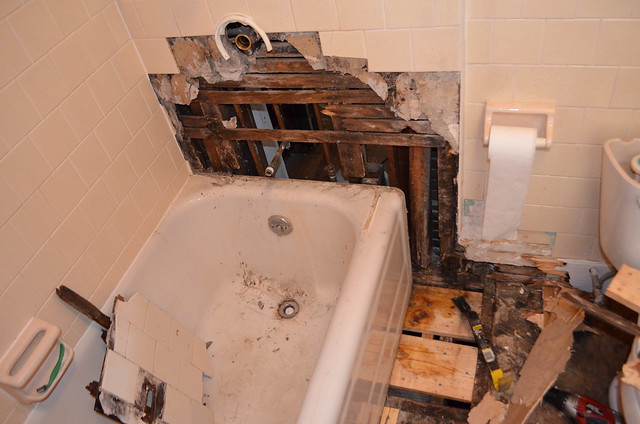 The tub faucet has apparently been leaking, dripping past a terrible past tile installation(plywood instead of backerboard with no sealant at the edge), and running down into the wall. 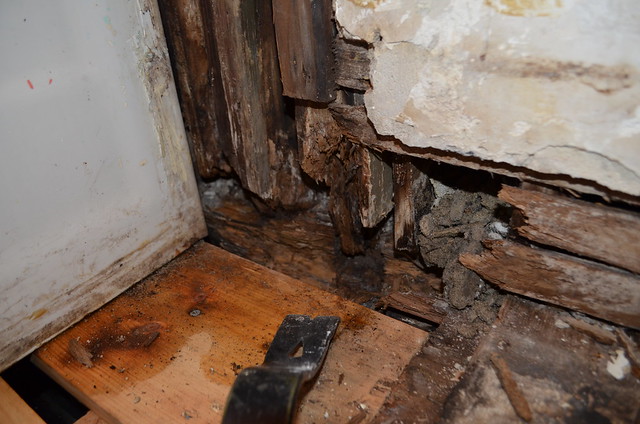 That horizontal there is a sill beam. I won’t even know how bad it is until I get the tub out, which involves ripping out part of two other walls to free it.

SURPRISE! Major bathroom renovation with structural repairs. Oh, you were already renovating another room, replacing the driveline & suspension on your truck, and replacing badly rotted windows before the winter? Tough luck!

I spent this weekend powering through as much of the window & bedroom work as I could so I can clear the deck for gutting & rebuilding this bathroom. The truck however is likely to end up on indefinite hold until this is dealt with. 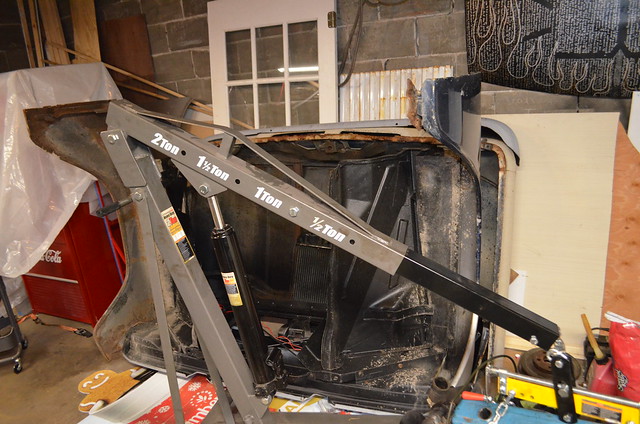 I finally started in on the major truck project that was supposed to happen this spring before I broke my collarbone. I’m pulling the very tired 230 inline and 3-speed and swapping in a 18K mile 250 inline, and a 3-speed with overdrive. I’m also rebuilding the front suspension and adding disc brakes with a 2″ drop.

The day a friend came over and between her, my partner and I we had the hood, bumper and entire front clip pulled in an hour. That went so well we decided to pull the engine & trans while they were there. Disconnecting everything and getting the cherry picker set up took another hour. Then we spent the next 1.5 hours trying to get the driveshaft yoke to slide out of the transmission. It did not want to come out for anything. I ended up ratchet-strapping the engine to the front frame crossmember while it was supported by the cherry picker, then a combination of prying the yoke while someone violently rocked the engine from side to side and the third person trying to tighten the ratchet strap finally pulled it out. 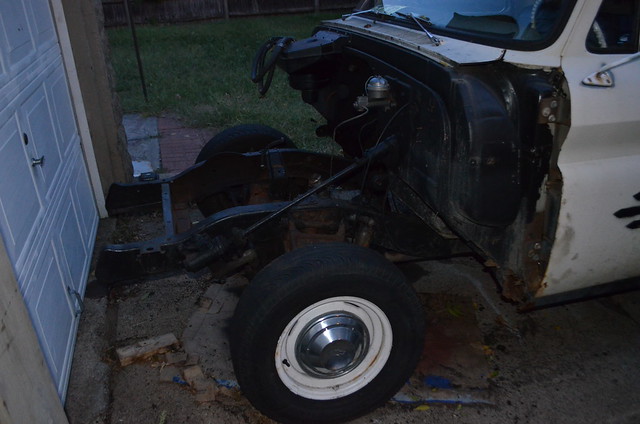 I separated the engine & transmission to free the bellhousing, the only major component I will be reusing for the “new” drivetrain. 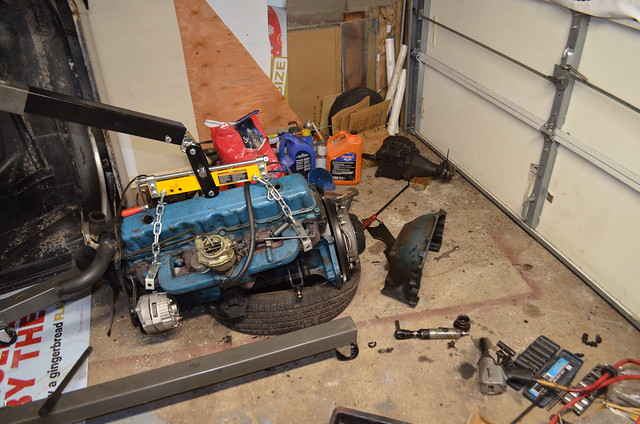 I also got the left suspension stripped off. The only part of the suspension & brakes I’ll be re-using are the upper & lower control arms(with new bushings), the center link, & steering box. 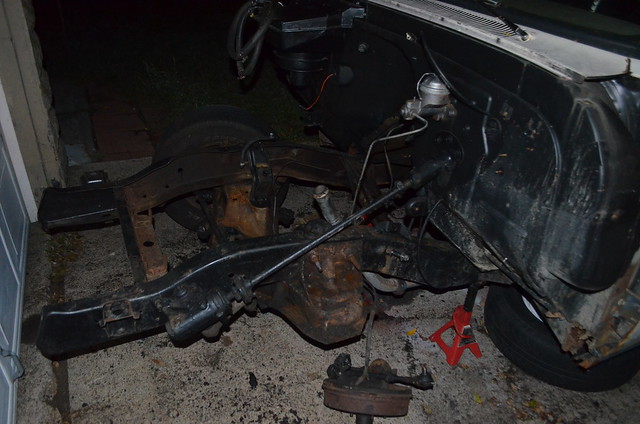 Once all the suspension & brake lines have been stripped off I will be doing major cleaning/degreasing in here, then either grinding or sandblasting the frame for painting before slapping new components on and running new brake lines. Then the new drivetrain can get assembled and installed. 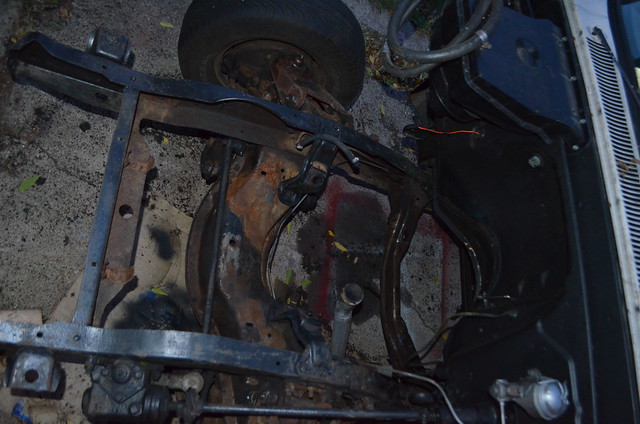 This shouldn’t be a time-consuming project, but a combination of weather, timing and health are conspiring against me, so I’m just hoping I have it buttoned up enough to get the sheetmetal back on by snowfall.