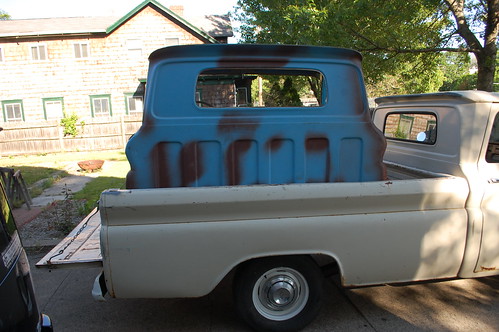 Sunday I decided I wanted to do something that would make the truck look better, and not just make the parts in the garage look better. So I broke out the D/A and angle grinder and stripped the passenger bedside. The truck has been repainted once, and the top coat of fawn came off with no effort, the newer primer and original paint/primer put up more of a fight though. I did manage to get it all stripped in one day. 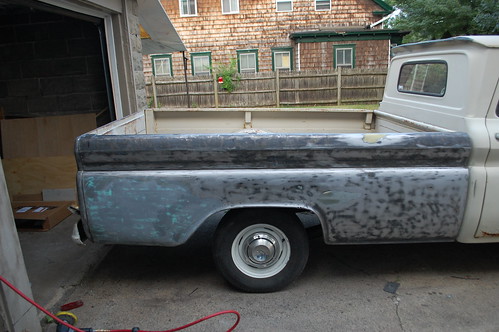 I did find filler behind the wheel and one spot higher up in front of the wheel, but the filler was in good shape and looking at the backs of the panel it appears to be smoothing small imperfections and not massive dents, so I left it in place rather than grinding it out only to have to re-do it. 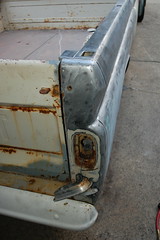 The paint did not want to come off the bedside cap for anything so I left it for now. I’ll have to re-grind this whole area when I install the ’50 Pontiac lights, so I’ll worry about it then. 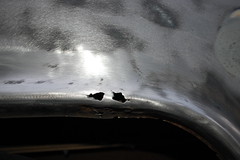 There was two spots of rot in the wheelwell, which I knew about. I  also found some pinhole rust in the bottom of the bedside cap. Nothing dire though. 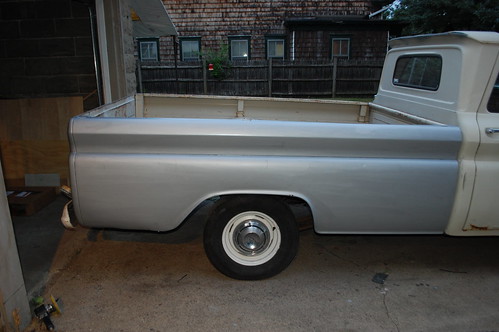 Once it was stripped, I coated it in Masterseries anti-rust paint as we have thunderstorms predicted for this week. I’ll just grind back the Masterseries when I get to he rust repair & bodywork.