The incredible pinkness of being 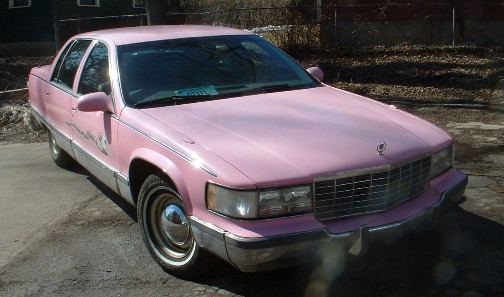 Ok, so I bought a pink Cadillac (and believe me, my friends would not letting me forget it!). A Pink Cadillac for ghods sake, it's not just a car, its a freaking cultural icon, it even has its own song. It was also really bizarre, to have complete strangers come up to me and complement me on the color. Almost no one seemed to manage not to comment on it. I even had a woman walk up to the car at a light and pound on the driver's window screaming 'I LOVE YOUR CAR!' This was fun for a bit, but to be honest got old quick. It was one thing to be complemented on a car you built (like The Cat), but another thing altogether to be complemented on a car you bought because it was cheap and don't even like the color of.

A lot of people asked me if the car is a former Mary Kay car, it was not. In fact it was a much brighter shade of pink than those cars, which are a very subtle pink. The story I got when buying it was that a former owner had painted the car this color for some reason, then passed away before he had a chance to even drive it. This still didn't explain the rediculous 80's graphic on the doors.

That being said here are some pictures:

The day I bought it:

Without snow. These are also a great series of shots of the keys locked in the car, something I didn't realize til I had taken them. By this time I had already had the front tires replaced, and had them mounted on the steelie rims I plan to have on the car rather than on the stock alloy rims.

So a friend had just started writing a webcomic when I bought thecar, and so felt the need to immortalize my car in it. Sadly the website is no longer around.

Dispite how much people seem to love the pink, I got tired of it rather quickly, and was happy when I could finally repaint her.